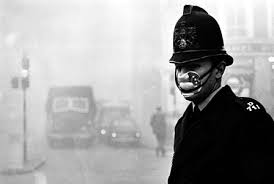 In the past, many towns and cities of the UK suffered with terrible smog, caused by the widespread use of coal fires in homes. The Clean Air Act, introduced in 1956 was one of several government measures introduced to help reduce smoke pollution and improve the quality of the air that we breathe.

Smokeless zones were introduced as a direct result of the Clean Air Act.  Many parts of the UK are now designated smoke control areas (also known as smokeless zones). In a smokeless zone you can only burn approved smokeless fuels such as Homefire, Ecoal50 or Phurnacite.

Firewood is not an authorised fuel and cannot be used in smokeless zones, unless burnt on a DEFRA exempt appliance (see below).

To find out if your property is within a smokeless zone, you will need to speak to your local council, who set the zones and are responsbile for enforcement.

Firewood can be burnt in a smokeless zone, but only on a specially designed exempt appliance. However this does not mean you can simply burn anything on an exempt appliance and you should always refer to the appliance manufacturer’s guidelines  as to which fuels can be used.

With the introduction of the measures above, coupled with the widespread consumer switch from coal to gas fired heating, air quality had improved dramatically since the 1950's.  However, that trend has seen a reverse in recent years.  Air quality; particularly in urban areas, has been getting worse.  This has been caused by the increased number of diesel cars and lorries on our roads, but also the rise in the popularity of wood burning stoves.

Ready to Burn is a scheme backed by Government, fuel suppliers and retailers to encourage home owners to only burn kiln dried firewood.  Kiln dried firewood produces significantly less smoke than wet wood when burnt, so a shift towards burning kiln dried will have a positive affect on air quality.  The scheme was launched in October 2017.